PhD student at Nottingham University and recipient of an MSC scholarship

Learning from the experts in South Sinai 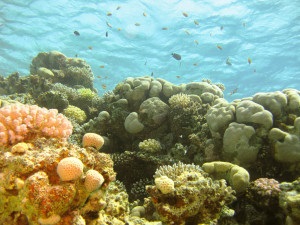 The warm, blue waters of the serene Egyptian Red Sea surrounding the South Sinai Peninsula are world-renowned as one of the world’s hotspots of marine biodiversity. Endangered species such as sea turtles, sharks and cetaceans depend on this unique environment for their survival. The area’s astounding coral reefs are home to more than 1,000 species of fish, 40 species of star fish, 25 species of sea urchins, more than a 100 species of mollusks and 150 species of crustaceans. South Sinai is also of considerable socioeconomic importance, for the Bedouin people who rely on the area’s rich marine resources for their daily protein and for the nationally-significant revenue generated from millions of international tourists who flock to the region for its world-class scuba diving and wilderness desert treks. These contrasting socioeconomic and human needs must now be carefully balanced with the sustainable management of the regions national resources, and now is a prime opportunity to develop such initiatives, following the recent popular revolution in Egypt.

My PhD, supported by the MSC, focusses on the traditional management of coral reef fisheries by the Bedouin tribes of South Sinai. Over the last few months, I have been completing initial stages of my fieldwork, based Coral reef, Dahabin the town of Dahab. Much of my time has been spent developing the trust of a number of expert Bedouin fishermen and women. The first objective of my work is to actually identify the Bedouin Arabic terms used to describe specific species, fishing gears and grounds. This has proved more complicated than expected, because of limited literacy, the nuances of the Bedouin dialect and my, still embarrassingly basic, Arabic skills! Later on I will be gathering detailed information on tribal codes related to fishing practices. In the field, I will talk to local fishers, conduct surveys of fishing effort and snorkel and scuba dive fishing sites to evaluate the in situ ecological effects of Bedouin traditional management.

Many Bedu are suspicious of state authority because they take great pride in self-governance following tribal laws and codes of conduct. On the whole, this approach has worked well for them and has persisted since pre-Islamic times. Through my research, I hope to capitalize on the strengths of this tribal code to open dialogue between state enforced Marine Protected Area management bodies and the local Bedouin coastal peoples. I feel that the Bedu have a huge wealth of knowledge that can teach us how to better manage fisheries, both in the definition of locally-acceptable regulations and the successful enforcement of these measures. As traditional Bedouin culture fades, and young people choose a more sedentary, material way of living, there is a danger that this valuable information could be lost forever if not documented.