From the east coast of Ireland to the east coast of Australia via South Africa, Cathal Farrell has worked in the seafood business for almost four decades across three continents. He now calls Coffs Harbour home. Since 2004, Cathal has owned and operated Upscale Seafoods, working with vessels within the Eastern Tuna and Billfish Fishery (ETBF) to get their product to customers within Australia and overseas as quickly and efficiently as possible.

When Tuna Australia gained certification to the MSC Fisheries Standard for the Eastern Tuna and Billfish Fishery in 2020, Upscale Seafoods took up the opportunity to secure MSC Chain of Custody certification for the fish they handle. We recently caught up with Cathal to talk tuna, trade and logistics for a fishery keen to strengthen its sustainability credentials.

Q: What is Upscale Seafoods?

"We're a shore-based marketing and logistics company, based in Coffs Harbour, on the east coast. There was a company here that was looking for somebody to manage their business, so, we came up here. We managed it for about two years, and then we bought the business off the owner and renamed it Upscale Seafoods. And that's what we've been doing since 2004.

"It's very much a family business. My wife, Lorna, does all the accounts and administration. Her daughter is an accountant, she works in the business, with her husband, Gerard. He handles all the factory side, a lot of the operations, the packing, all the documentation, the food safety program, the MSC certification. He was the one who got that in place for us. It's small, but family.

"While we're based in Coffs Harbour, we unload basically anywhere from Sydney through to Bundaberg – that’s our normal range. We've got several trucks on the road. While we're ostensibly a marketing company, a huge part of what we do is logistics, offering that service to boats. In the ETBF these boats are moving around a lot - they could be in Nelson Bay today and in the Gold Coast the next trip."

Q: What’s your role in the business?

"On a day to day basis? Everything, really. As the owner, I'm responsible for everything, pretty much. While my wife and her daughter do all the accounts and administration, the factory is the engine room of the business. So, it involves everything from marketing, and developing markets overseas, through to driving trucks, onloading in different ports. I'm regularly in the trucks myself, which is a part of the business I love.

"That's an important part of what I do, because it's a direct contact with the boats. It's a very hands-on type of business. I don't think it's a business you can do effectively from behind a desk. In fact, you can't. The product we're dealing with, it's a fresh product - tuna and swordfish. There's a huge variation in the different qualities and characteristics of the fish, which are constantly changing based on seasonality. Every fish has to be inspected, graded, and then sent to the market that's best for that particular fish.

"We always like to joke that you've got to plan, but you never use Plan A, you may use Plan B, and it's regularly Plan C that you end up using, because factors can change so much from one day to the next with the catch rates, the weather. A boat that might be planning in coming into Coffs Harbour, for example, could find itself further down the coast. All of a sudden you're getting the phone call at three in the morning to get down to Nelson Bay."

Q: How have you dealt with the challenges of COVID-19?

"That was a huge game changer. I remember in about May last year realising that if you were doing things the same as you had pre-COVID, you were probably doing them wrong. You pretty much had to rethink everything.

A large part of our business is export-based - air freight exports. COVID had a huge impact on the number of planes in the sky. The government program, IFAM – the International Freight Assistance Mechanism, was a huge help. It guaranteed us air freight. It allowed us to move our product overseas - a large part of our business is into the US. Tuna and salmon have actually fared really well under COVID, whereas a lot of other species had been very negatively impacted. Demand for tuna stayed very strong and very constant.

"So, you had to change your business. You had to recognise what was happening first, evaluate that, and then you had to change dramatically to adapt to those changes. For example, pre-COVID you were able to book air freight a day or two in advance. When COVID hit back in March last year, we found ourselves in a situation where we now had to book freight two to four weeks in advance. And with some of the planes, if you booked them you were liable for the air freight, even if you didn't fill it. So, that dramatically changed the way vessels operated, to focus on not just the fishing, but the operational side of the business.

"Once the dust settled a bit after the first month or so of when we went into lockdown, it then became apparent that the retail sector, for example, was booming for us, while the hospitality food service business was completely dead. So, we had to change how we were selling our product. We aligned ourselves with customers that were more retail-focused for the first three, four months until food service started to reopen.

"And then, dealing with operational things like ensuring you had safe practices in the factory so infection wasn't spread.

If you had to take a negative situation and look for a positive, one of the positives was it forced you to relook at your business very hard and to restructure it in a way that was going to allow you to survive.

"One of the biggest challenges we face as a fishery is crewing fishing vessels, and the pandemic has had a huge impact because the majority of crew on Australian tuna boats are overseas workers. Obviously with the pandemic, it's been almost impossible to get a lot of these guys in, or to get them home. Many haven't been home to see their family for two years. That’s really hard."

Q: Why did you choose to pursue MSC chain of custody certification?

"The first real exposure I had to the MSC was when Walker Seafoods became accredited. I had heard of it prior. I'd been to a couple of presentations. But really it was through David Ellis and Tuna Australia. David did a huge amount of work in securing funding that allowed pretty much the whole of the industry access to MSC accreditation. Through Tuna Australia, he was instrumental in putting it in place. Obviously, we had to do a lot of work, putting in procedures, changing procedures in place operationally, and going through the chain of custody on the various audits, that resulted in us getting that accreditation."

Q: What has getting MSC certification meant for your business?

"The immediate benefit of MSC accreditation is on frozen albacore. If you're freezing albacore and exporting it to canneries overseas, it's almost a requirement now that you have MSC accreditation. There's quite a significant price differential between MSC and non-MSC products. Certain canneries won't even touch a non-MSC approved product. So, for any companies involved in freezing albacore and exporting it to canneries, it had an immediate impact.

"While the MSC has a limited footprint in the Australian seafood market, from what I have seen so far, it has a footprint over in the US. We are busy working with companies over there that have the MSC chain of custody in place, and are trying to use MSC certification to give us a greater reach into the marketplace.

"It'd be great to see broader exposure to the significance of the blue fish tick in the Australian market. It's not a cheap system to put in place. I think sustainability, it is on people's minds. There's a lot of scaremongering goes on out there, a lot of terrible misinformation and outright lies. We've done a lot of very positive things in our fishery together with AFMA, the management authority, it'd be nice to be able to counter these nonsense arguments out there and say: Hey, we're doing it right."

Q: What’s next for your business?

"For Upscale Seafoods, I'm very much aware of the fact that we're still in a pandemic, and there's a lot of changes ahead. There's been a lot of companies that have done very, very well under this. And there's older traditional companies that probably haven't done as well. But you just have to keep focused on the fact that it is a moving target, exchange rates are moving a lot. Fuel prices are up significantly compared to what they were pre-January. So, it's very much a watch and act, I would say." 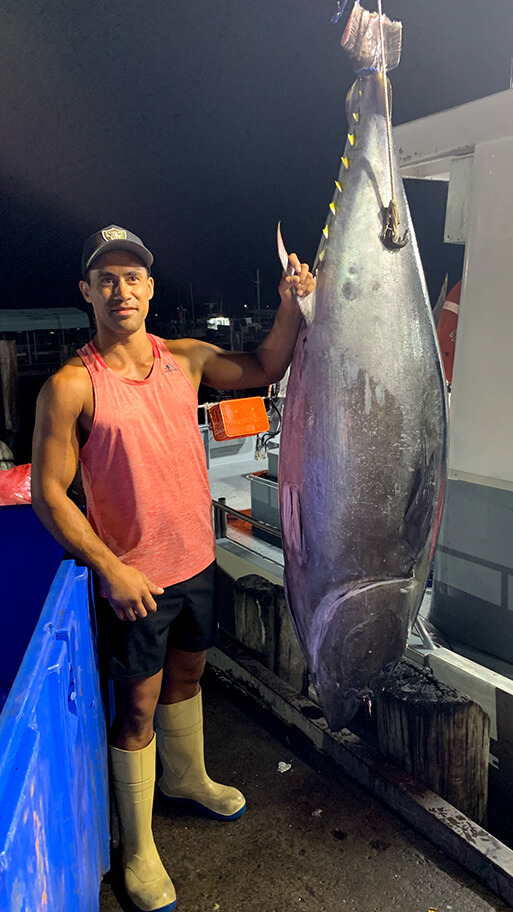 Q: Do you think Aussies value the effort which goes into supplying this amazing Australian seafood to them?

"We do a lot of unloads in different ports. You could sell tickets to that, if you wanted. People are always amazed by it. I don't think they fully understand everything that goes into it, but they always find it very, very interesting whenever you're unloading. There's always a heap of questions that you get asked.

"But I think, really, the great thing about our product and our fishery is its versatility. That's the key with tuna and swordfish: the versatility that it offers as a product, and the diversity of our fishery that operates basically from far north Queensland down south to Eden, and all the different markets that it has access to and the different species that it has, it really makes it such a strong fishery."

"Poké bowl. Definitely poké bowls. It's just such fun with the family, that you put all the ingredients out there and everybody can build the bowl exactly how they want it. From young kids to older people, everybody seems to enjoy it. It's just one of those genius dishes that you can't get wrong."