What Do Sharks Have to Do With Healthy, Sustainable Fisheries?

When we lose top predators like sharks, it can destabilize the whole food chain–for humans and marine animals alike. Learn about predation release, fear ecology, and what these terms mean for protecting the ocean’s most misunderstood animals and the seafood you love. 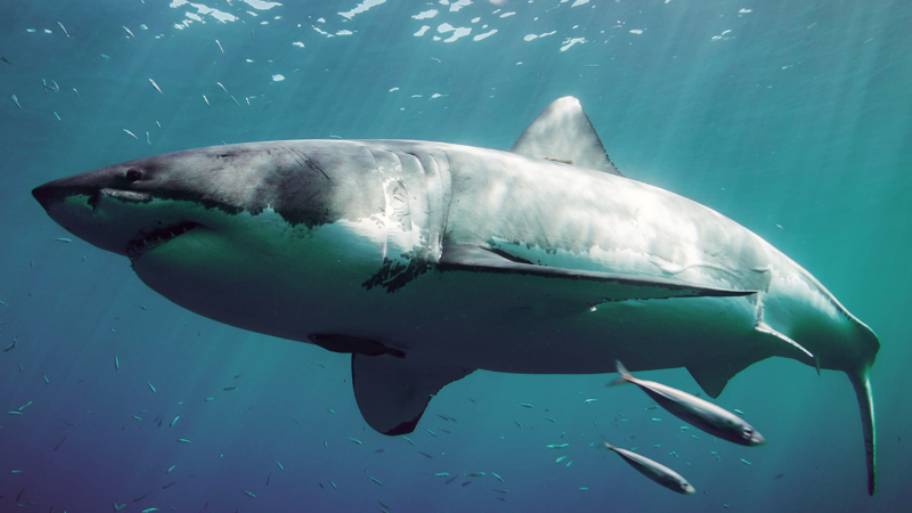 Do Humans Need Sharks to Survive?

When people ask me, What’s one thing you wish everyone knew about sharks? I reply that humans are much better off with healthy shark populations off our coasts than we are without them—that the benefits far outweigh the risks.

How could having tons of sharks swimming near coastlines possibly be good for humans?

Predators—like sharks—help keep the marine food chain in balance. These coastal food chains provide food for billions of humans and jobs for hundreds of millions. This is a food chain that we’d very much like to keep in balance that is already being threatened by growing populations, overfishing, and climate change.

When we lose top predators, including sharks, it can disrupt the whole ecosystem in a variety of unexpected ways.

What Role Do Sharks Play in Marine Food Chains?

Through the simple act of eating, predators (sharks) help keep prey (seals, tuna, etc.) populations in check. By preferentially hunting and eating the sick, the weak, the old, and the dying, predators help ensure that only the fittest survive—placing natural selection pressure on prey species.

When top predator populations decline, this can result in “predation release,” resulting in those predators’ prey populations rapidly increasing.

This may also be called “mesopredator release”. A mesopredator is a mid-level predator, one step on the food chain down from a “top” or “apex” predator (shark! Seeing a trend here?)

Trophic cascades can have a devastating ripple effect, impacting the very fish stocks that we wish to regulate through sustainable fishing.

It is worth noting that, while a recent high-profile example of a shark decline leading to a trophic cascade has been thoroughly debunked, trophic cascades could still happen due to shark population declines.

Can Fear Help Conserve Our Oceans?

In short, yes, although perhaps not in the ways you might expect.

Have you ever avoided taking a shortcut through a dimly lit alley because it didn’t feel safe? Perhaps you felt safer, but found yourself taking more time and spending more energy getting to your destination?

This anthropic example helps to highlight the larger concept of “fear ecology,” in which the mere presence of predators causes prey to avoid a specific area—even if it is an otherwise great spot for foraging. Fear and avoidance help to protect these habitats from destruction.

A great example of fear ecology in action is the effect sharks have on animals like dolphins, sea turtles, and dugongs, effectively keeping them away from certain habitats, like seagrass beds. Keeping herbivores away from seagrass beds helps keep these ecosystems, which are critical habitats for juvenile phases of many marine fishes, intact.

Similar fear ecology effects of sharks have been shown to keep coral reef ecosystems intact, a hot button issue in the world of marine conservation. Without this natural limitation in place, our ocean ecosystems become more vulnerable to irreversible damage.

Dr. David Shiffman is a marine conservation biologist who studies the ecology and management of sharks. An award-winning public science educator, Dr. Shiffman’s bylines have appeared in the Washington Post, Scientific American, Gizmodo, and a monthly column in SCUBA diving magazine. He invites you to follow him at @WhySharksMatter on Twitter, Facebook, and Instagram, where he’s always happy to answer any questions anyone has about sharks.