A foodie's guide to halibut

Halibut is the prime rib of the sea. This mottled brown bruiser of a flatfish is often talked about by fishermen and chefs with unusual reverence for a white fish. Foodies roll out superlatives to describe it. Scour any comments section beneath a quality online fish provider and, typically, you’ll find these words about halibut: ‘tastiest’, ‘firmest’, ‘meatiest’, biggest’... often in the same sentence. And it’s true, mostly. The brilliantly named fish – hippoglossus is its generic forename, meaning ‘horse tongue’ in Greek – is an ocean floor-dweller that has firm white flesh with large flakes, a meaty texture, and a mild, creamy flavor.

Its desirability is reflected in the price. Along with the likes of John Dory, this is often one of the most expensive fish on the menu at a seafood restaurant. At almost twice the price of cod in the UK, you’d expect it to be a special fish.

It wasn’t always the case, though. The history of halibut fishing is a cyclical one, and there was a time (almost two centuries ago) when cod fishermen off New England and Atlantic Canada regarded halibut as a nuisance by-catch. Over on the Pacific coast, as recently as the 1990s, a poorly regulated and dangerously short spring season resulted in overfishing that briefly flooded the market with an abundance of cheap fish. Perhaps this is when the saying “let's have halibut just for the hell of it,” became popular. But presumably folks don’t say that much anymore.

Rather like bluefin tuna, halibut does a nice, steady line in ‘monster’ stories. Females can grow to an extraordinary size – over 10ft long and weighing more than 200kg. The media loves to ‘splash’ one of these bumper catches and zoom in on the fisherman’s fight to get it onboard. Such heavyweight halibuts are an exception, though. An average halibut is caught at about 11kg and those smaller than 81cm must be tossed back into the sea.

One of the key challenges facing sustainable fisheries is that female halibut don’t reach sexual maturity until at least 10 years of age. This creates a dilemma for regulation bodies and fishers as to the best-sized halibut to catch in order to guarantee stocks remain healthy in future years.

Catch size is important, says Tiare Boyes, a fisherman and MSC ambassador in Canada who is part of a tight-knit community of halibut fishers in British Columbia: "For me, it is about quality over quantity. We catch a variety of sizes of halibut, but the best quality flesh comes from small to medium sized fish. It also means the bigger fish can swim free and reproduce to ensure the next generation of delicious halibut meals."

Fish fact: halibut is derived from the Middle English term, haly ("holy") and butte ("flat fish"); it was a traditional favorite on Catholic holidays in the late 19th and early 20th centuries.

Halibut is in season between March and November. Capable of migrating long distances, this deep-sea dweller is a ferocious predator, filling its gloss-white belly with most varieties of fish and seafood.

“There is no such thing as a ‘bad cut’ on a halibut,” says Boyes. “The fish fillets into four boneless fillets and they are all equally delicious.” It can also be sold as skinless on-the-bone steaks (the skin can be a bit tough), brick-like loins, or as a whole fish if not too large. It is delicious when delicately smoked and served as wafer-thin carpaccio slices in a dressing such as shallots, ginger, and soy.

Its fine, firm texture makes it ideal for serving raw. Try it cubed and marinated as ceviche or as sushi or sashimi. In fact, halibut is considered a delicacy in Japan, where it is known as hirame. Strips come in three grades and are cut from the thickest part of the halibut fillet.

In Canada, wild Pacific halibut cheeks are a much-loved treat. These rapidly seared delicacies are prized for their sweet scallop-like flavor and tender texture. Boyes is a big fan: "In our family, whoever is cooking gets to eat the golden cheeks – it’s a good incentive to be chef for the night."

As chefs seek new ways to serve fish in line with zero-waste initiatives, halibut collars are becoming a popular new dish in Canada. "Known as the ‘chicken wings of the sea’, collars are tasty and fun to eat," says Boyes. Food waste is a hot topic for the likes of the Pacific Halibut Management Association and Wild Pacific Halibut commercial fishery, who are using social media to encourage consumers to try their hand at preparing stock and fishcakes with the trim from halibut.

Fish tip: try to avoid 'chalky' halibut where the flesh looks dull and a little mushy.

Like any fine catch of the day, simple is probably best. But don’t skimp on liquid when cooking halibut as it’s a relatively lean fish and can dry out quite easily: keep the butter and olive oil to hand and baste regularly, or poach it in liquid to keep it moist. Cook halibut until the flesh has turned opaque and its flakes are just starting to separate.

Halibut shines alongside most of the usual suspects paired with robust white fish – think miso glazed, butter beans and chorizo, variations of salsa verde, and classic wine sauces. You can enjoy it in spring braised with watercress and asparagus; poached in a buttery dill sauce; tray baked with heirloom tomatoes and fresh herbs; steamed and served on a creamy, bread soaked gazpacho ("salmorejo"); pan seared in a rich brown butter, with lemon, olives, and capers or perhaps you prefer a licorice flavored finish of fennel and Pernod? The UK's Queen Elizabeth II – according to her former chef – enjoys her halibut on a bed of spinach with Mornay sauce (béchamel with grated Gruyère cheese).

"Halibut is one of the ocean’s luxury species, right up there with turbot," says Mitch Tonks, a seafood restaurateur in south-west England and MSC ambassador in the UK. "A piece of halibut from a sustainable source would certainly be one of my top fish to eat. The texture of the ivory flesh is steak-like in nature, so gives a more substantial mouthful than some fish but has a delicate subtle and quite mild flavor. This combination means that it handles the addition of punchy ingredients such as citrus or fennel as well as buttery sauces very well."

Fish fact: during its early development, a halibut's left eye shifts towards its right eye on top of its small head. This allows it to keep a lookout above when burrowed in the ocean bed sand.

Sustainable stocks of halibut are largely found in the northern hemisphere in the Pacific northeast and throughout the North Atlantic to the Russian Barents Sea. Within this vast region, there are currently 11 halibut fisheries certified to the Marine Stewardship Council Standard. Five of these have been awarded certification since 2019.

In 2009, wild Pacific halibut was the first fishery on Canada’s Pacific coast to achieve MSC certification. Since then it has established one of the most rigorous monitoring systems in the world.

Known as the 'graveyard of the Pacific', the sea north of Vancouver Island can be a wild and dangerous place to fish when the wind and waves are up. As soon as the fish breaks the surface of the water, two video cameras monitor activity and each fish is recorded on video and in a logbook. At the dock, each fish is counted, measured, and tagged by a validator to ensure the fish are traceable and the fishers are accountable for everything they catch, both target and non-target species.

To avoid the indiscriminate and harmful fishing of the past, each year stocks are assessed and limits set to the available harvest. Changes to the management of the fishery have adjusted the number of fishing vessels to better match this quota. This reduces pressure on marine resources and minimizes environmental impacts, but comes at a social cost in terms of jobs and livelihoods. The vessels use hook and line gear with hooks designed to reduce incidental capture of other species and ‘tori’ lines which are effective in mitigating seabird mortalities.

What's it really like to be a fisherman? Meet the fishers: British Columbia halibut

Halibut is very popular in Canada, and readily available from fine dining restaurants to fish and chip shops. "It commands a high price but I think this reflects the value of the fish and the value of the fishery," says Boyes. "Choosing seafood that has been harvested responsibly and with consideration of our future fish stocks can be more expensive but that price isn't being extracted from the environment. We need to shift our perception from 'expensive' to 'valuable’'"

On Canada's eastern coast, the Atlantic halibut fishery attained MSC certification in 2013, after 15 years of careful management to rebuild depleted stocks. Atlantic halibut is found all over the North Atlantic, but this is the only Atlantic halibut fishery currently certified by MSC. The fishery ranges from off the coast of Virginia, USA in the south to the waters of Disko Bay, Greenland in the north. In the US, halibut is most common in the Gulf of Maine. Around 85 percent of Atlantic halibut is caught by demersal longlines, which cause minimal damage to seabed habitats. The gear consists of baited hooks attached to shorter lines coming off the main line. The halibut is sold as fresh and frozen fillets and the main markets are Canada, the US, and the EU.

It's subtle, but Pacific halibut is said to have a milder taste than its slightly fattier Atlantic cousin. Greenland halibut, sometimes known as Greenland turbot, is a distinctive smaller variety caught by trawlers in the icy waters around Greenland, northern Norway, and eastern Canada. On Royal Greenland trawlers, the fish are hauled on board, graded, sorted, headed/gutted, and frozen directly in the onboard factory – all within a matter of a few hours. With similar levels of Omega-3 fatty acids as salmon, Greenland halibut has a creamy flavor and is mostly exported to Asia. In true Nordic style, its richness can be balanced by pairing it with sour or bitter ingredients such as a cucumber and dill pickle and wild lingonberries.

Nick Wyke is a journalist and food writer who is passionate about local, seasonal, and sustainable produce. 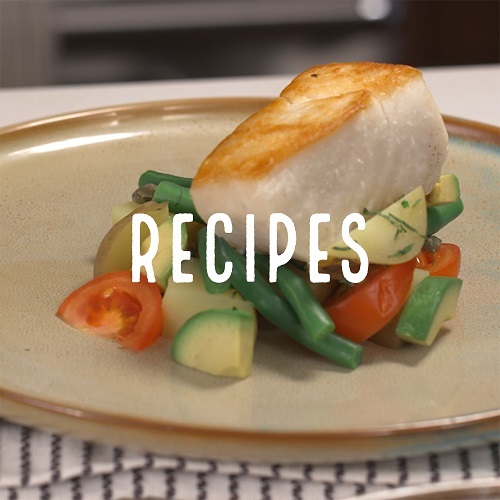 Find a new favorite dish in our collection of sustainable seafood recipes from expert chefs. 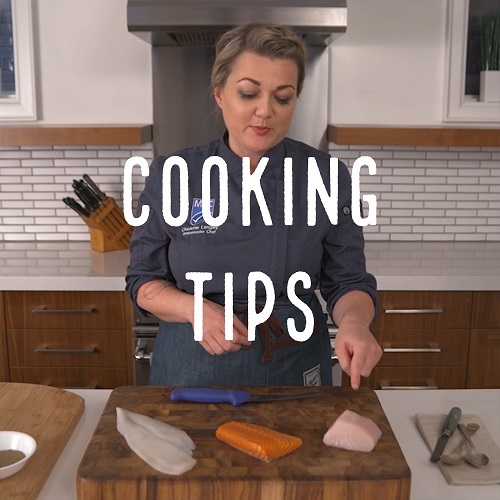 For cooks of all levels, check out these tips and tricks for the best sustainable seafood dishes. 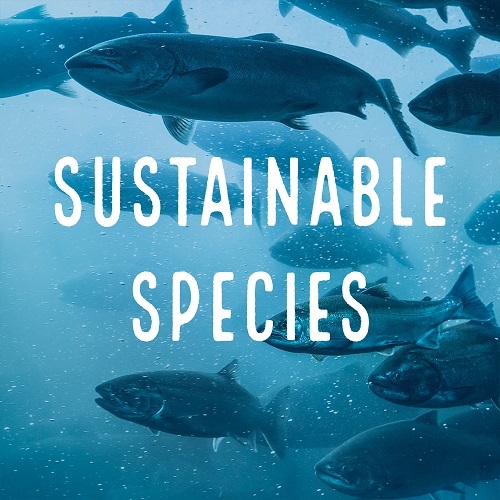 Find out if your favorite seafood options (and more) are good for you and the ocean too.