At dinner that night, as I introduced braised hake cooked with tomatoes, peppers, and chickpeas, there were compliments and empty plates all round. I still love cod, but for Christmas Eve now we always phone Pete a few days ahead for some hake.

Long bodied and lean, beneath hake’s gun-metal skin and silvery belly is a mild tasting fish with a delicate texture. In fact, hake is something of a Cinderella fish. It has long deserved to receive more attention in places that favor more popular (and sometimes less sustainable) white fish such as cod, haddock, and pollock. A close relative of the cod family, when cooked just right this deep-sea predator with pin-like teeth transforms into a subtly sweet fish that yields small but beautifully firm flakes the color of Hollywood teeth.

There are a dozen species of hake, including European hake fished off the coast of Cornwall, England and Southern hake from the icy waters at the foot of Chile. Available around the world, it is predominantly a deep-sea fish, though some hake inhabit shallower waters. Growing up to one meter long, hake is a brisk fish that will ambush and consume fast-moving smaller prey such as mackerel, herring, sardines, sandeels, and codfishes. 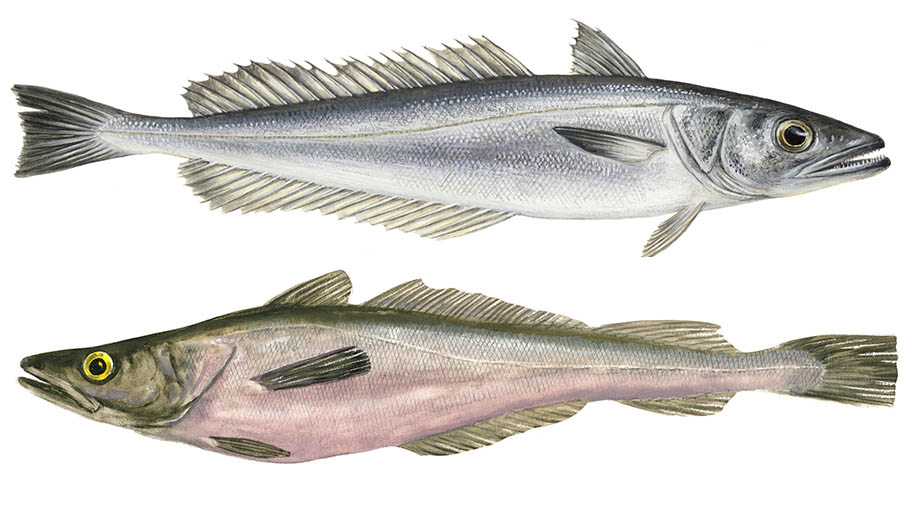 In the kitchen, hake is often used as a versatile and less expensive alternative to cod. It’s a good first step for those who have never strayed far from salmon, tuna, and white fish staples. Like other white fish, it can be fried, grilled, baked, braised, cooked in foil, or used in soups and stews. However, because of its naturally soft flesh, it deteriorates quickly and needs to be cooked at its freshest, especially if you prefer your hake to be meaty rather than mushy.

“Hake is a light and sweet fleshed fish species very similar to cod as they swim in the same family," explains MSC Ambassador Chef Charlotte Langley.

"When fresh, the texture is sweet and mild and visually is beautifully opaque. I absolutely love enjoying hake when it is in season by making the most delicious fish and chips. If you have any leftovers at all, I like to lightly salt and store in the freezer to make the tastiest fish cakes with potatoes and molasses. Can't beat an east coast classic.”

Like all fish, demand for hake varies in different parts of the world. It is very popular in China, South Africa, Ukraine, and Lithuania as well as Spain, where it is consumed more than any other fish. While in the US and Canada, Pacific hake is mainly exported or used as a substitute for cod and haddock in frozen or processed products such as fish fingers and blended seafood snacks like surimi.

Like all fish, there are confusing overlaps in species and nomenclature. In the US and other English-speaking countries, hake is frequently sold as ling or whiting (silver hake), which is different from European whiting. In France, where hake has a lower profile than cod, it is known as ‘merlu’ south of the Loire, while north of the river it is called ‘colin’, much to the amusement of British tourists.

There are scores of Iberian hake recipes, many of them involving garlic and paprika. Regional variations include Basque hake with a parsley-rich salsa verde, Galician hake on a braise of potatoes, garlic, tomato, and onion, and hake and apples cooked in Asturian cider. Nose-to-tail aficionados will approve of the fact that the Spanish enjoy hake chins as a delicacy, either fried with breadcrumbs or stewed in stock with paprika and clams. The Spanish even have a hake cake! The retro looking ‘pudin de merluza’ is a mash-up of hake, eggs, chopped pimiento, cream, and tomato sauce. It is baked, cooled, and then topped with mayonnaise.

Hake also partners well with gutsy flavors such as capers, saffron, sherry, olives, and cayenne pepper. Branching out, it is great with bacon, coconut, and even a judicious sprinkling of parmesan and breadcrumbs to form a crunchy crust. Try hake in deep-fried Scandinavian-style fish balls ('fiskeboller') with a creamy dill sauce, oven-roasted with crushed balsamic cherry tomatoes, or pan-fried with a herby butter sauce served on charred red pepper and lemon couscous.

As of October 2020, there are eight Marine Stewardship Council certified fisheries landing sustainably caught and processed hake around the world. European hake is fished off the coast of Cornwall and at three fisheries in the North Sea; Pacific hake (or Pacific whiting) is fished off the west coast of the United States and Canada; Southern hake is fished in the Pacific waters of Chile - the most recently certified fishery - and New Zealand, and deep water hake in South Africa.

The Namibia hake trawl and longline fishery is hoping to be certified sustainable before the end of 2020.

Total catch numbers of MSC certified hake are high in South Africa (90%) and in the Pacific US and Canadian waters (100 percent), as well as in the UK, where the majority of hake landed is MSC certified.

These different species of hake are caught, processed, and eaten in different ways. In the US, for example, American Seafoods, which claims to operate the highest-scoring MSC certified sustainable fishery in the world, has introduced large, at-sea frozen processors for hake similar to the sort used for wild Alaska pollock.

This at-sea advantage preserves more freshness, taste, and nutrition. As well as using every part of each fish it catches with nothing going to waste, the company writes on its website: “Our high catch rates, fish utilization, at-sea processing, and immediate freezing, state-of-the-art equipment, environmentally friendly ammonia refrigerants, and ultra-efficient logistics all work in concert to produce fish products with the lowest carbon footprint among mainstream protein sources. While land-based animal agriculture is a major user of fresh water, our vessels are outfitted with desalination equipment that is capable of satisfying all our freshwater onboard production needs.”

“Hake is definitely one of our best-loved fishes,” says Siba Mtongana, a chef and MSC campaign ambassador in South Africa. “If you think of fish and chips here, then hake always comes to mind first.”

She adds: “The great thing about hake is you can either go subtle or you can go all-out bold on the flavor profiles. It’s a good fit for a fish pie or a beautifully fragrant grilled hake with red Thai curry sauce. I also love the fact that it has very few bones, which are easily removed, so I don’t need to worry when cooking hake for my children.”