Accidentally catching the wrong species, sex or size of fish can have serious consequences.

Bycatch - the unintentional capture of unwanted fish and other marine species - is an ecological and economic problem, common to fisheries worldwide. One consequence of bycatch can be the discarding of unwanted - often dead - catch. Bycatch can threaten populations of vulnerable marine animals but also the financial stability of fishers. If fishers are found to be catching too much of a non-target species, their operations may be temporarily closed.

Under the MSC certification process, certified sustainable fisheries must prove they are actively managing and reducing any incidences of bycatch. There are numerous existing solutions; from seabird-deterring multicoloured streamers and hourglass shaped crab pots featuring escape gaps for smaller crabs, to devices which prevent hungry sea lions from entering lobster pots.

However, bycatch remains a major problem for many fishers around the world for a multitude of reasons that are often beyond their control. These reasons might include: overlap of fishing grounds with whale migration routes, species redistributions caused by climate change and changes in fishing practices or existing legislative constraints. Academic research into finding bycatch solutions has been ongoing since the 1990s.

The use of artificial light is of increasing interest to the academic community, both as a bycatch solution and a method of increasing target species catchability. Studies to date highlight variation in the behavioural response of fish to light, which differs according to species and environment. An MSC certified pink shrimp fishery has had success in using LED lights to reduce bycatch of tiny silver fish called eulachon, in addition to sole and rockfish.

Researchers from Bangor University in Wales, UK, have recently identified a simple technique involving artificial light, that can reduce unwanted catch by up to nearly half. The study, published in March 2020 in the Journal of the Marine Biological Association of the United Kingdom, tested the impact of LED lights on the number of haddock and flatfish caught in a queen scallop fishery off the Isle of Man.

Lucy Southworth, lead author of the study, said: “Traditionally, and this goes back decades and maybe even centuries, fishers used lights to attract fish. We are turning that on its head to try and manipulate the behavioural responses in fish and other animals, to either repel them away from gear, or to manipulate their behaviour so they can escape from the net.”

The researchers worked with startup tech company SafetyNet Technologies Ltd to test the effects of attaching their LED lights to specific parts of a trawl fishing net. Differences in catch were then compared between:


Square mesh panels are larger than the holes featured in typical diamond mesh nets and allow non-target species to escape during fishing. 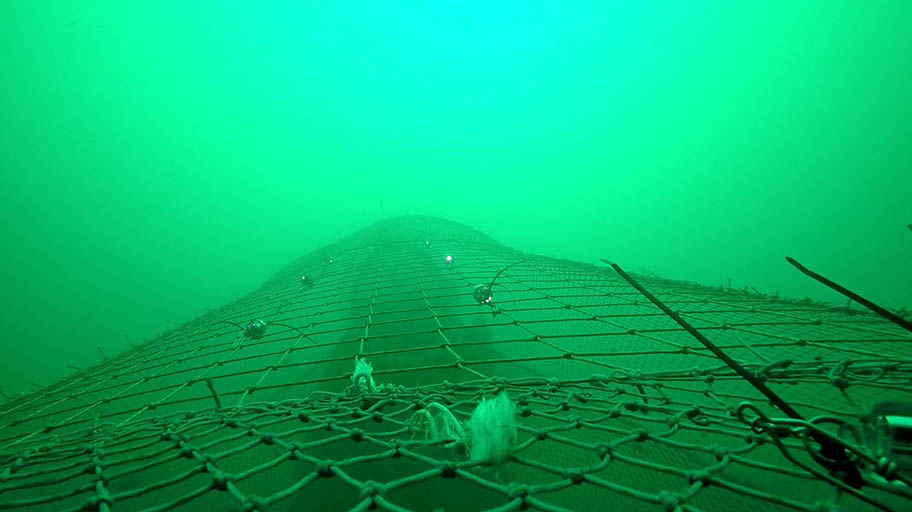 Findings revealed that the use of LED lights has the potential to reduce the retention of fish of various shapes and sizes at specific depths.

Square mesh panels were effective in reducing bycatch of whiting and haddock at depths of 29-40 metres but had no effect in deeper, darker waters of 45-95 metres. Once LEDs were added to illuminate these “exits” in deep water, haddock bycatch was reduced by 47% and flatfish (dab, plaice and lemon sole) by 26%.

"The influence of LEDs in deep, dark waters shows that one size does not fit all for bycatch reduction devices. To effectively reduce bycatch, devices need to be tailored to suit the environment and the species encountering the fishing gear, as fish behaviour changes under different fishing conditions, which affects escapement,” Southworth adds.

As the LED lights were relatively cheap and easy to attach to existing nets, this solution could prove popular and potentially be adapted to other kinds of fishing gear amongst both small- and large-scale fisheries.

The authors also suggest that attaching LED lights to nets could also prove beneficial in reducing bycatch of other species, as shown by other scientific studies investigating seabird and turtle bycatch.

SafteyNetTechnologies Ltd and lead supervisor of the project, Professor Michel Kaiser of Heriot-Watt University, are keen to progress this science and industry collaboration further.

Professor Kaiser added “there is considerable scope for disruptive technology, such as the use of lights, light ropes and fibres, to exploit the behavior of fish and other animals to lower or eliminate unwanted bycatch.”

“The light devices made by SafetyNet Technologies Ltd also provide a platform for exploring other stimuli such as vibration or even sound. We know that some fish go ‘quiet’ when they detect dolphin clicks – future fishing gear might be fitted with a virtual ‘dolphin’ to keep unwanted fish out of the net”.

This work was completed with Professor Michel Kaiser, of Heriot-Watt University, through Bangor University’s Sustainable Fisheries and Aquaculture research group. It was also conducted in collaboration with the Isle of Man government (The Department of Environment, Food and Agriculture) and sponsored by SafetyNet Technologies, who designed the lights.