As an MSC briefing underlines the need to protect small pelagic populations, two stakeholders in Mexico tell how they put their differences to one side to chart a sustainable path.

The Gulf of California was once described by the marine explorer Jacques Cousteau as “the world’s aquarium”. Home to 900 fish species and 170 different types of seabird, its pristine waters have also been the setting for an extraordinary meeting of minds between an industrial fishery and an ecologically-minded NGO.

In 2011, the Sonora Small Pelagics Fishery, Mexico’s largest by volume, was close to meeting the sustainability Standard set by the Marine Stewardship Council. Operating off the state of Sonora, dozens of vessels were using purse seine nets and new sustainable techniques to catch sardines and thread herring in large shoals.

Comunidad y Biodiversidad (COBI), a local marine conservation organisation, regarded the Sonora fishing industry as “the enemy”. Landings of Pacific sardine had crashed in the early 1990s and the NGO was determined to flag concerns it had over stock levels and interactions with native bird populations.

The MSC’s transparent objections procedure offers the opportunity to resolve such disagreements and, after last-minute consultations with the state government and the fishery, COBI took a momentous decision.

“We changed our mentality,” declares Francisco Fernandez, a marine biologist with the NGO. At the time he was engaged in robust exchanges both with the fishery and internally with scientific colleagues. “We decided among ourselves that the best course of action was to sit down with the industry and work with them to improve the environment.”

Realising that such a decision would attract the ire of other NGOs, Fernandez says “we had to put aside our problems to be open to collaboration with people we had often fought with in the past”.

León Tissot was on the other side of the negotiating table representing the fishing industry. They viewed the NGO with suspicion and were certain they were not at fault, but MSC certification required them to work out its outstanding issues with COBI.

Tissot, now Vice President of the National Chamber of Fishing and Aquaculture Industries in Sonora (CANAINPESCA), says: “We believed then and now that we were not overfishing. But, without COBI’s intervention, we just wouldn’t have received certification. We thank them for that.” 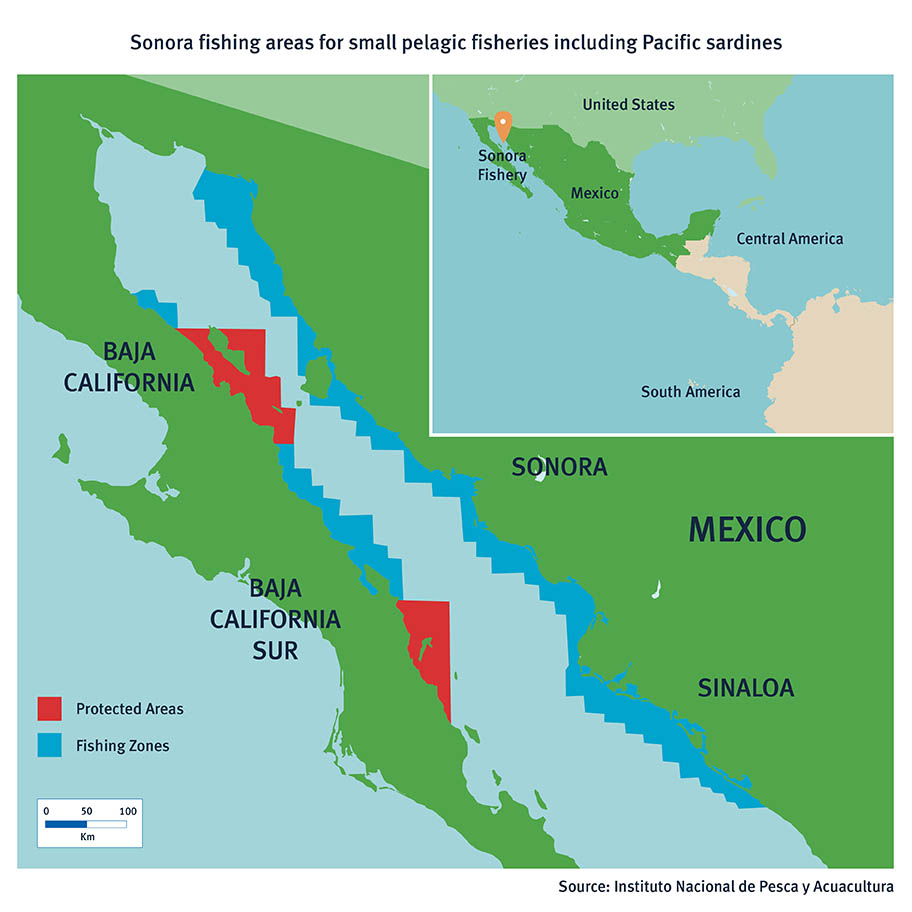 The Sonora fishery is an example of stakeholders overcoming historic differences for the greater good – and features in a new MSC briefing on small pelagic fisheries.

While highlighting the good work being undertaken, the briefing underlines the fragile status of the world’s small pelagic fish populations.

Nearly half (46%) of small pelagic fish stocks are overfished, according to international trade organisation the IFFO, with the report warning that many fisheries in this space have either failed to agree quotas or experienced population crashes.

Due to fast-shifting stock migrations brought about in part by climate change, nations are failing to reach agreements over fishing zones and quotas which is leading to overfishing.

This has resulted in fisheries being suspended from the MSC Program. That, in turn, means less sustainable raw product to support the growing demand for farmed fish, often reliant on fish meal, and oil made from small pelagic fish.

Aquaculture has been the fastest-growing food production sector of the last 50 years with growing global demand for farmed fish putting pressure on wild-capture of small pelagics such as sardines and herring.

These species are used for aquafeed to feed fish like farmed salmon and to produce omega-3 oils supplements. Meanwhile, other small pelagics such as anchovies and mackerel are also still caught in big quantities for direct human consumption.

The UN’s Food and Agriculture Organization estimates that by 2030 about 59% of the fish available for human consumption will originate from aquaculture production, itself drawing on small pelagic feed. That is up from 52% in 2018.

The report also draws attention to companies using alternative plant-based materials for feed. It says this industry could make market inroads if small pelagic fisheries do not become more sustainable.

"We need all actors in the seafood supply chain to commit to harvesting and sourcing sustainable small pelagic fish – as well as sourcing farmed fish that have been fed on sustainable feed," says Camiel Derichs, MSC Global Program Development Director.

"This is not only important for the health of small pelagic stocks, but the wider marine ecosystem, with many marine animals relying on species like krill as a vital food source.

"They are also an important contributor to the food and nutritional security of many poor, low-income households in developing countries."

Back on the Mexican Sea of Cortez near the Midriff Islands, the on-board observer program ensures that 20% of the fleet has independent assessors verifying sustainable fishing practices. Every three months fishing is halted to take stock of how working practices are proceeding.

“We’re here to fish and abide by local and well-planned regulations,” says Tissot. “We are not here to pillage our own environment.

“We’ve been fishing sardines in this area for 60 years. These fisheries are run by the third generation of fishermen. Their fathers and grandfathers were here before them and they are the most interested in making sure there is enough fish for the next 60 years and beyond.”

Fishing vessels, often equipped with refrigeration, are typically 25 to 30 meters long (82-98 feet) and have a 120-180 metric ton capacity. Made up of eight companies, an average crew size of eight fishermen go on one- to two-day trips.

Located between the Baja California peninsula and the Mexican mainland, fishing takes place close to the shorelines within the Mexican Exclusive Economic Zone (EEZ). All catch is landed in the ports of Guaymas and Yavaros in the state of Sonora.

A decade ago, Luis Bourillon was a marine conservationist at the negotiating table for COBI. Today, he is the MSC’s Fisheries Outreach for México, Central America and Caribbean and has a unique perspective on the collaboration.

“The relationship has not always been easy but it's the only example I know of an NGO working hand-in-hand with an industrial fishery in Mexico. That is a big achievement.

“Looking back, it was a good decision. The fishery has improved, maybe not to the point that some NGOs want. But some just want fishing to stop altogether.”

Bourillon hopes that the Sonora fishery can bring a different perspective to environmental conflicts between NGOs and the fishing industry.

“When one has the data and the other doesn't, it is really hard to discuss how to make progress,” he says. “All the work and collaboration is based on science rather than radical perceptions. Those who do have objections need to back their cases with data.”

Some elements of friction remain between industrial and small-scale fishers in the region. “In a way, it’s a continuous struggle to show that everyone is doing the right thing,” he says. 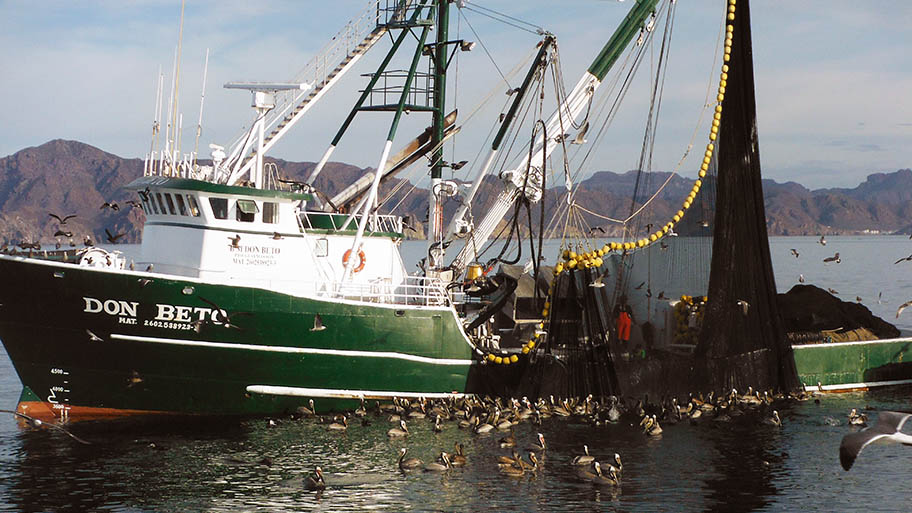 Sonora produces 50 million cans of sardine, representing two thirds of Mexican state production and is worth more than $90 million annually to the country’s economy. “The fishery is producing a lot for Mexicans and a lot of feed for industries that rely on fish meal and oil,” Bourillon adds.

Fernandez says “the best way to achieve sustainability is to collaborate and generate the right alliances with the producers”. He adds: “Our goal as an NGO is to conserve the environment but we can do that by complementing the fishery’s mission and working with them.”

Asked if industry and COBI still disagree, Tissot laughs: “We talk it over and usually we come to an understanding. They give in sometimes and then sometimes we actually do give in too.”

Safeguarding the fish that feed other fish

Small pelagic species are key to marine food webs and are also some of the world’s most caught and traded fish.