The socio-economic value of tuna 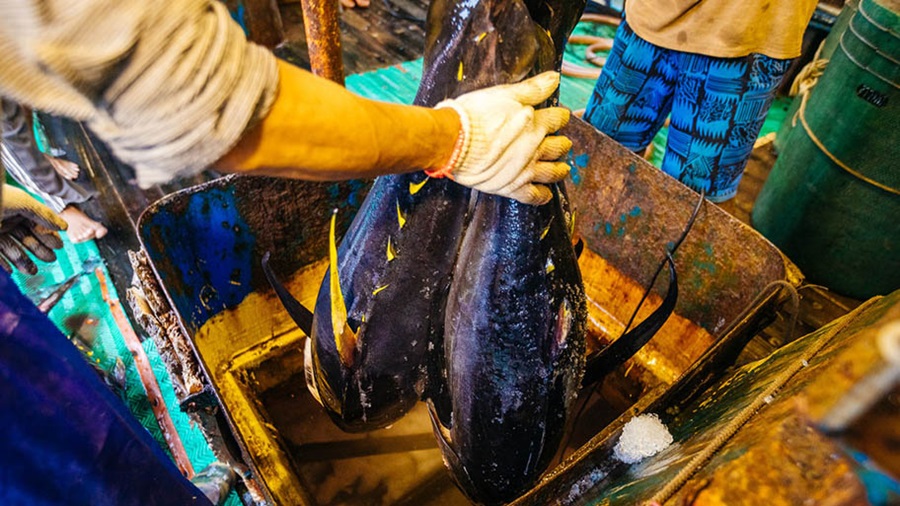 Arguably the most economically valuable fish in the ocean, tuna provide employment and food all over the world. The global tuna market was worth around US$12 billion in 2018,1; though the annual value of tuna product sales is as high as US$42 billion and are reported to make up nearly 30% of total global seafood trade2.  In the Asia-Pacific region alone, the tuna industry directly employs more than 6 million people.3

About 70% of tuna sold last year was in cans4,  providing a major source of inexpensive, healthy protein. At the other end of the spectrum, whole bluefin tuna can fetch eye-watering prices on Japanese sushi and sashimi markets: one restaurateur recently paid a record-breaking US$3.1 million for a 278kg Pacific bluefin tuna at auction5.

Indonesia is the single largest tuna producer, catching more than a million tonnes each year6  with a total export value of around US$760 million7.  Although industrial purse seine and longline vessels are responsible for about 80% of the catch by volume, most tuna fishers in the country use small boats and traditional fishing methods: they include 170,600 hand liners and around 4,000 pole-and-line fishers. One example is the recently MSC certified tuna fishery in Sorong, West Papua, run by PT Citraraja Ampat Canning (CRAC), where 35 pole-and-line vessels employ 750 local fishermen.

Similar “one-by-one” tuna fisheries provide high levels of employment in many countries. In the Maldives, where almost all tuna is caught by pole-and-line or hand lines, around 13,650 people are employed in the sector. And it’s not just developing countries: in America’s Pacific Northwest, for example, around 800 vessels use traditional pole-and-line or troll-and-jig methods to catch MSC certified albacore tuna.

Tuna processing is also a hugely important industry. Thailand is the dominant player, responsible for nearly half of canned tuna production8.  Its processing industry employs around 80,000 people, although wages are low and labour conditions often poor, particularly for the migrant workers who dominate the sector9.  In Ecuador, the next largest tuna exporter, tuna fishing and processing employs 25,000 people10, with exports generating over US$1 billion in 201811.

It’s in the island nations of the Pacific Ocean, though, that tuna holds the greatest socio-economic importance. Pacific island countries control around 60% of the total tuna catch12,  and for some small island states it represents their most important economic resource. Over the last decade, these island states have begun to exercise greater control over their tuna resources as a way to build their economies. This includes both charging higher access fees to vessels from other countries fishing in their waters, and building domestic fishing and processing capacity.

In 2016, government revenues from selling access fees approached half a billion US dollars in Pacific island states, while the local tuna harvesting sector made a similar contribution to GDP13.  In Tuvalu, fisheries earnings made up 55% of domestic revenue in 2013, while the 50 Tuvaluans employed as observers to monitor foreign tuna fishing vessels make up 2.5% of the country’s formal workforce14.

But while Pacific island states export the vast majority of their tuna, it’s also needed locally for local food security and public health. Populations are growing, and the region suffers from the world’s highest levels of diabetes and obesity. A recent study suggests that, to combat these challenges, tuna should supply 12% of local fish needs in the Pacific in 2020 and 25% by 2035, equivalent to 2.1% and 5.9% of today’s catch15.
From food, livelihoods and cultural traditions to multimillion dollar businesses, it’s clear there’s a lot riding on tuna. All the more reason to ensure stocks are managed sustainably.