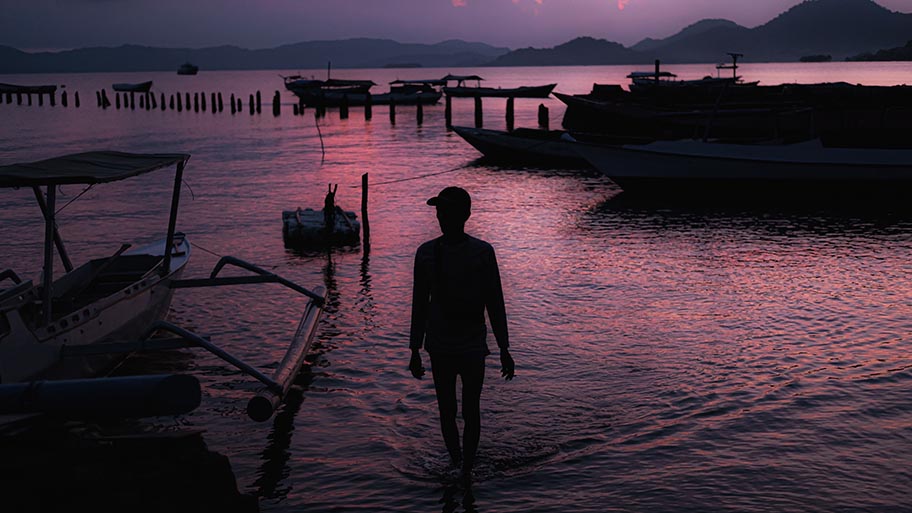 “We must think of our future descendants - there aren’t a lot of fish. There were plenty, but now there aren’t as many,” said Rahmatullah, a fisherman from Labuhan Kuris in Indonesia.

That afternoon, he moored his vessel at Saleh Bay, and removed his fishing equipment and catch. A 900–1100g snapper fish was in his hand, a lot smaller than before. The use of destructive fishing equipment has been one of the causes of marine ecosystem destruction. It disturbs fish growth, thus reducing the amount fishers catch.

Rahmatullah is among the many fishers of Saleh Bay, West Nusa Tenggara in Indonesia who have begun to use more environmentally friendly fishing equipment.

The change was prompted by a new regional government regulation to promote sustainability in fisheries. The introduction of the new regulation in 2018 helped establish the Joint Committee of Sustainable Grouper and Snapper Fishery Management (KP2K2B), a collection of NGOs, local fishers and a government ministry. It was set up makes the fishing areas more sustainable and thereby support fishers and their communities.

“I once used destructive fishing gear, but after being instructed by the government, we opted for large fishing hooks instead,” said Rahmatullah.

The gear is similar to tonda kedo-kedo fishing gear, which is a string attached to a fishing hook and colourful silk bait, and a gillnet string shaped into a rectangle with mesh on each side added with a float and sinker at the top of the net.

Both fishing gears allow large fish of a suitable size to be caught, but the gears will not catch fish eggs before they hatch, or small fish that are still growing.

The government regulation goes beyond fishing equipment and the establishment of KP2K2B though, it also dictates where fishing can occur. Managing and restricting locations will allow the growth of fish populations.

“I’m thankful that the regulation exists and there are conservation areas - not for us to fish, but for the fish to lay eggs.”

Rahmatullah says the large-scale shift in practice isn’t solely down to the government. NGOs like the MSC have also played a part, advising fishers on sustainable practices that will benefit them in the long-term.

“We have realised the benefits we gain from the programmes initiated by the MSC and the Government. Now we only catch the bigger fish and release the small ones,” he added.

Through the Sustainable Grouper and Snapper Fishery Development Program executed together by the government, NGOs and 15 groups of fishers, the area has already achieved an almost 60% reduction in destructive fishing activities.

In 2017, 30 fishers were recorded as using destructive methods, in 2020 there were 19. The percentage of fishers switching fishing equipment has grown steadily and is now up to 63%.

“I consider snapper and grouper in West Nusa Tenggara as potential commodities that we have to preserve, so we took the initiative to establish a committee to supervise the care of these species,” says Yusron Hadi, Head of the Marine and Fisheries Office of West Nusa Tenggara Province.

“We conduct this form of protection by researching and studying the proper ways to preserve snappers and groupers, and by educating all related participants - especially the fishers - to keep up participation in sustaining our marine resources.”

According to data from the Ministry of Marine Affairs and Fisheries (MMAF), snapper and grouper are among Indonesia’s top seafood exports with up to 19.5 million USD export value in 2020.

“Part of what we’re doing with the fishers is involving them in the gathering of data. They obviously understand the conditions of the local waters, so it’s important to have them on the front line of data collection. Then we involve them in the creation of strategy. We work together on the problems we are facing so we can take the necessary steps toward preservation.”

The transition towards sustainability is also supported by the Ministry of Marine Affairs and Fisheries (MMAF), who have worked alongside NGOs in the Fish for Good program, a project initiated by the MSC, with support from the Dutch National Postcode Lottery. The project’s mission is to improve fishery sustainability and data gathering, while getting fishers to jointly support and adhere to the programme.

“The government works with MSC Indonesia through the Fish for Good project in an effort to make certain that marketed fishery products from Indonesia have gone through a sustainable and proper management system.” says Trian Yunanda, Director of Fish Resources Management at MMAF.

He hopes for long-lasting cooperation between NGOs and the government to make sustainable fisheries a reality and successful, especially in Saleh Bay.

The process towards sustainability is not easy, there are challenges with human resources, management regulations and technology.

Beyond these, changing equipment is not straightforward for fishers.

“For me, the level of understanding from the local people is another obstacle. We realise that some fishers in West Nusa Tenggara are still indulging in destructive fishing activities and we to need to minimise their movements. After that, we need to make sure existing facilities and technologies give them reassurance. There will be challenges with social acceptance.” says Hadi.

Some fishers like Rahmatullah are persistent though, always urging his fishing colleagues to preserve the ocean and Saleh Bay in particular.

“Saleh Bay is beautiful, the fish are plentiful, especially snappers and groupers. Let’s preserve it, as recommended by the Government. The reefs of Saleh Bay are lovely, so let’s keep them that way, my friends. Don’t let anyone ruin it,” he added. 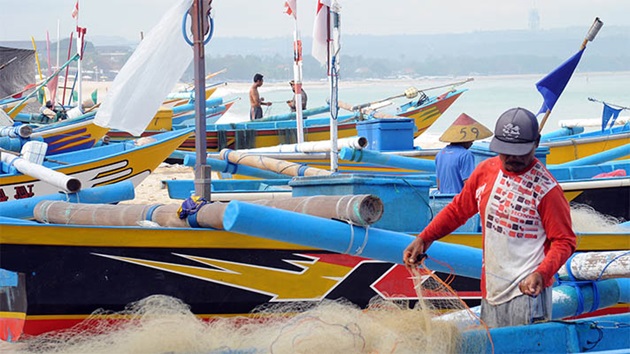 This four-year project aims to guide fisheries on their journey towards sustainability, giving them the support and tools to improve fishing practices and restore healthy fish stocks.