From steaks to sushi to sandwiches, tuna is one of the world’s most popular seafoods. With global demand for tuna increasing dramatically over the last 50 years, ensuring its fished sustainably is more important than ever. Here we answer some of the most common questions about tuna.

Should I eat tuna?

If you want to eat tuna try to limit your purchases to MSC labelled products. The majority of canned/tinned tuna is skipjack tuna and there are several MSC certified sustainable sources. MSC labelled albacore and yellowfin tuna are also available in many supermarkets around the world.

What are the different kinds of tuna? Which tuna can you eat?

Get quick facts about tuna 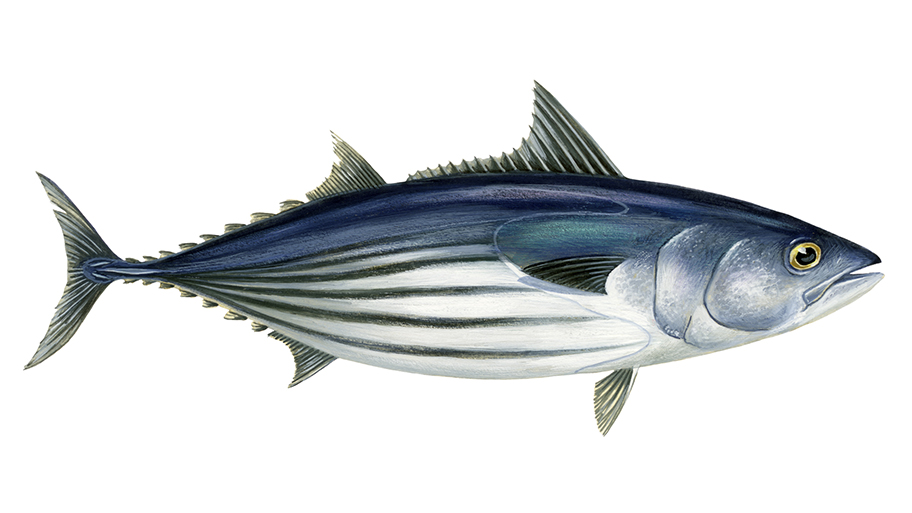 We eat 5 main species of tuna: albacore, bigeye, bluefin, skipjack and yellowfin. More than half of all tuna caught is skipjack (60%), which is the smallest and most abundant of the tunas. Around half of that comes from an MSC certified fishery in the Pacific Ocean. Most cans of tuna have skipjack inside. Yellowfin, which is often sold as fresh or frozen fillets, is next most caught tuna species (28% of global catch). Bigeye tuna (7% of global catch) is attractive for sashimi as it lives deeper in the ocean so has layers of fat. Albacore is the most popular MSC certified species in the USA, and globally it is 4% of the world’s catch.

How big are tuna?

It depends on the species and if they are juveniles or adults. Skipjack tuna are the smallest and most abundant tuna, growing to about 1m in length by two years old. Adult yellowfin and bigeye tuna are about the same size, between 40-180 cms, with yellowfin becoming fully grown by 2 years old and bigeye reaching maturity at around 3 years old. Albacore grow more slowly than these three tunas, reaching maturity at around 5 years old when they are on average 1m long. The biggest tuna is the bluefin which can measure as much as 2 metres in length, nose-to-fin. In their first 6 months bluefin tuna grow from an egg to around 30-40cm in length and weighing in at 1 kg, and can take 5-10 years to reach adulthood. The biggest bluefin ever recorded was almost 2 metres long.

Where do tuna live?

Tuna can be found in most areas of the ocean, and can travel thousands of miles in a year. In some areas, several different types of tuna form schools with other types of fish. For example, skipjack are found in large schools with yellowfin and bigeye tuna as well as other types of fish and marine life. Tuna also have preferences for different layers of the ocean. During the day Skipjack are found deep underwater, moving up closer to the surface at night. Albacore tend to be found at around 400ms below the surface, and because bigeye live in deeper depths than skipjack or yellowfin they have a deep layer of fat to insulate them from the colder waters.

Besides humans, what eats tuna?

It depends on the species and what stage of life it is at. Adult bluefin tuna are apex predators: they're at the top of the food chain and eat a wide range of fish. Skipjack, which are the smallest tuna, are eaten by some species of whale as well as sharks, marlin and other large fish. The tiny eggs tuna release into the sea are also food to a wide range of ocean species.

How healthy are stocks of tuna around the world?

A report by the UN published in 2020 says between 2014 to 2019 the number of major tuna stocks experiencing overfishing went down from 13 to five. This means eight fish stocks are now being rebuilt to reach a healthy level. Research by the ISSF shows the current status of each of the major tuna stocks in more detail: skipjack tuna numbers are in great shape in most of the ocean, because it is a fast-growing tuna that can reproduce from 2 years old. But it needs careful management to keep it that way. Yellowfin in the Indian Ocean is overfished, as is bigeye in the Atlantic, and the two species of Pacific bluefin tuna. The easiest way to check if the fish on your plate has not come from these zones is to look for the blue MSC label. It's on the pack or fishmongers label or menu.

How easy is it to buy MSC labelled tuna?

German shoppers have the biggest choice of tuna from MSC certified sustainable fisheries. In contrast, Asia has the fewest products licenced to carry the blue logo, but this is changing rapidly.

How can we be sure there are enough tuna in the ocean?

Fishing sustainably relies on scientific data that assesses how many fish there are (stock status), how quickly they breed (maturation rate), how many fish can be caught while making sure there are enough left in the sea to make the next generation (maximum sustainable yield), and what would happen if there was a threat to the health of the stock (harvest control rules). All tuna fisheries that have met the MSC Fisheries Standard have scientific evidence that the tuna is caught from a healthy stock, is a well-managed fishery and is minimising its impact on the ecosystem.

Worldwide there are 23 stocks of the major commercial tuna species: 5 skipjack, 4 yellowfin, 4 bluefin, 6 albacore, and 4 bigeye stocks. As mentioned above, some of these tuna stocks have healthy numbers and are being managed well, others are not.

Overall, the latest estimates from the UN FAO indicate the global tuna catch in 2019 was 5,768,109 tonnes. As more tuna fisheries make a commitment to sustainability, and become certified to the MSC Fisheries Standard for sustainable fishing, a greater proportion of all the tuna caught is engaged in the MSC program.

Read more about the challenges and solutions for sustainable tuna fishing.

How is tuna caught?

There are different ways of catching tuna. The methods and gear used in tuna fishing could depend on:

Any of these gear types can be used sustainably, depending on their use, the amount of tuna being caught and how their gear affects the wider ecosystem.

Some tuna fisheries use additional tools like Fish Aggregating Devices (FADs) which have been associated with bycatch (accidental catch) of other species. However, these can also be well managed and FAD doesn't always mean "bad"

What is pole and line fishing? 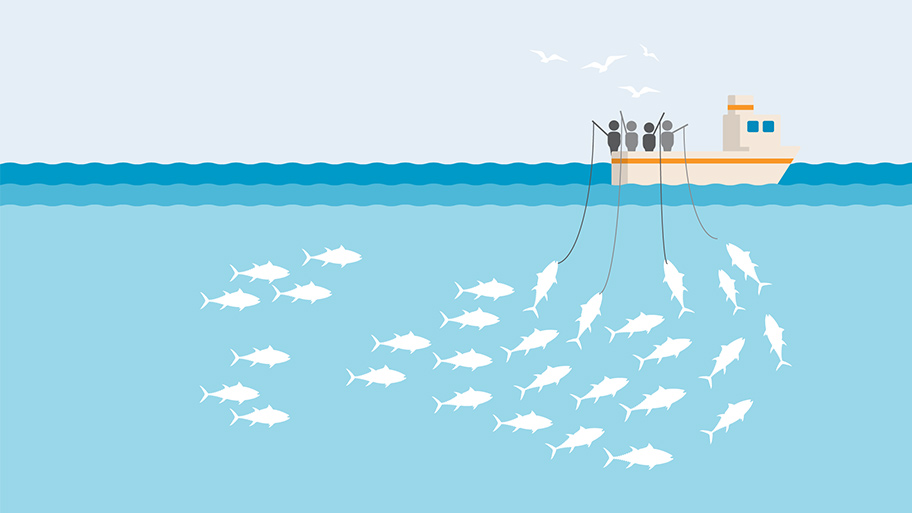 What is purse seine fishing?

What is longline fishing?

What is sushi grade tuna?

There isn’t one standard for "sushi grade" tuna. In Japan there are tuna grades within the industry but those grades differ between regions and companies. Tuna buyers are highly skilled at assessing if a tuna meets the specifications of the sushi and sashimi chefs they supply. They look for qualities such freshness, colour, fat content, texture, and size. But in the USA, "sushi grade" may indicate it has met a regulation that requires tuna to be flash frozen.

Is tuna a farmed fish?

There are three species of bluefin tuna: Atlantic, Pacific, and Southern. There are four distinct bluefin stocks and some are in better shape than others.

Atlantic bluefin tuna has two stocks: Eastern and Western. The Eastern Atlantic stock has recovered to some extent over the last decade.

In 2018, two fisheries that fish the Eastern Atlantic bluefin tuna stock entered assessment to see if they are sustainable. The independent assessment team will score them against the MSC Fisheries Standard.

Most tuna species have nothing to do with dolphins. Yellowfin tuna are associated with dolphins in parts of the Pacific Ocean, where the species often swim close together.

In these places dolphins swim near the water surface, with yellowfin tuna up to 150 metres below. The reasons for this flocking behavior are uncertain and are only observed in older yellowfin tuna.

Historically, fishers in the Eastern Tropical Pacific near Central America have used the presence of dolphins to find yellowfin tuna.

Tuna in the Eastern Tropical Pacific is usually caught with purse seine nets, which surround a school of fish before being pulled together. Because dolphins swim above tuna, accidental catch (bycatch) of dolphins has been high in the region.

In 1989, dolphin bycatch for Mexican purse seine tuna fisheries was 132,000 animals. A new strategy was needed and more selective fishing methods were introduced. Between 1985 and 1997 dolphin mortalities dropped by 99%.

Since 2017, the Northeastern Tropical Pacific Purse Seine yellowfin and skipjack tuna fishery has been MSC certified.

Dolphin safe, or dolphin friendly labels mean that tuna has come from boats with no interaction with dolphins. These labels don’t provide any reassurance about the wider impacts of tuna fishing. The blue MSC label means that the tuna was caught with consideration for the wider marine environment, including impacts on species such as dolphin. 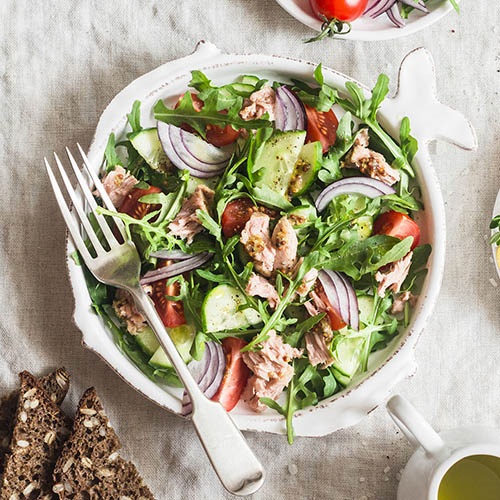 Visit our tuna hub for recipes and stories 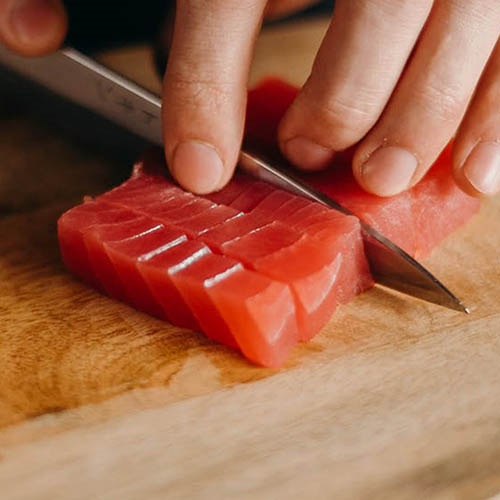 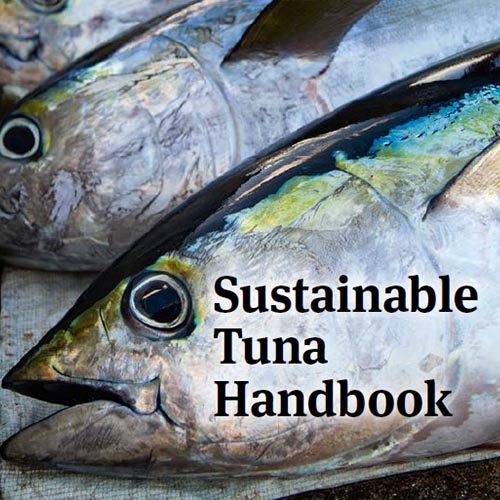