The fifteenth meeting of the ‘Conference of the Parties’ to the United Nations Convention on Biological Diversity took place 7 - 19 December, 2022, in Montréal, Canada.

Known as the United Nations Biodiversity Conference, COP-15 builds on previous efforts to reverse the global destruction of nature and biodiversity loss.

It stems from the creation of the Convention on Biological Diversity (CBD) at the United Nations Earth Summit conference in Rio in 1992 and sought to design an international treaty on how to best use and protect life on Earth.

The CBD recognised the need for urgent policies to transform economic, social and financial models that exacerbate biodiversity loss.

Prior to COP-15, governments had set targets to reverse biodiversity loss – the Aichi Biodiversity Targets. None of these, however, were met by the 2020 deadline.

COP-15 is the latest effort by governments to address biodiversity loss. At the meeting, nearly 200 nations agreed to the Kunming-Montreal Global Biodiversity Framework, with quantifiable targets to halt and reverse biodiversity loss of all life on Earth, both on land and in the ocean – from microscopic bacteria to gigantic whales.

What is the Kunming-Montreal Global Biodiversity Framework?

These aim to protect and conserve, by 2030, at least 30% of the planet, including a reduction to near-zero of the loss of areas of high biodiversity importance, and the sustainable management of biodiversity and ecosystems.

What is the difference between COP-15 and COP-27?

COP-15 was directly concerned with biodiversity while COP-27, which took place in November 2022 in Egypt, related to climate change. However, while COPs 15 and 27 were two distinct events, they followed the 2021 Glasgow COP-26 climate treaty where, for the first time, the world’s nations agreed that biodiversity loss and climate change are intrinsically linked.

What is meant by biodiversity?

Biodiversity or ‘biological diversity’ is a collective term that reflects the variety of life on Earth. Diversity is calculated by measuring both ‘species richness’ (the number of different species in a defined area) and species composition (the relative proportions of these species). In addition, the ‘abundance’ of a population or a species (the total number of individuals) is also commonly considered when evaluating diversity changes.

Why does biodiversity matter?

Complex ecosystems are formed by the interactions of many diverse species, with every organism playing its part in the overall structure. In a delicate balancing act, these ecosystems replenish the air and water, and their functions contribute to stabilising the climate, enabling Earth to support more life, including that of humankind.

A biodiverse ecosystem is a healthy ecosystem. Within the ecosystem each species plays a role, like predators keeping populations in check by weeding out weak and sick animals, or like plants and trees that provide oxygen, food and shelter for other animals, including humans. These contributions from the natural world are known as ‘ecosystem services’ and if the biodiversity of the ecosystem is depleted or species go extinct, ecosystem services are lost too.

We depend on biodiversity for the air we breathe, the water we drink and the food we eat. But humanity currently uses the equivalent of 1.6 ‘Earths’ to support our way of life (#Generation Restoration, UNEP).

If organisms continue to be removed from ecosystems at the current rate through human-induced habitat loss, degradation, pollution, and the unsustainable exploitation of nature for food, the ecosystems may collapse. This would lead to mass extinctions and exacerbated climate change (UNEP). We are already seeing evidence of this across the world.

Why does marine biodiversity matter?

While tropical rainforests have long been considered ‘the lungs of the planet’, far more of the planet’s oxygen (estimated 50-80%) comes from photosynthetic marine organisms (NOAA).

As well as contributing to the air we breathe, the ocean plays a role in stabilising the climate. Seawater evaporates, condenses into clouds, and makes rain and snow that irrigate the land. The ocean and the biodiversity within it, play key roles in carbon sequestration – the long-term capture and storage of atmospheric carbon dioxide. Mangroves and kelp forests protect shorelines and coastal communities from storms and erosion.

The ocean is central to human lives and livelihoods and provides much of the food we eat. Fish is the primary form of protein for more than a third of the global population and wild fisheries provide a livelihood for 60 million people worldwide (UN FAO).

Marine biodiversity is essential because it allows nature to continue being self-sustaining, productive, resilient and adaptable to environmental changes.

Why is marine biodiversity under threat?

Marine ecosystems are more inaccessible and expensive to research than ecosystems on land. However, it is scientifically acknowledged that human-induced climate change coupled with marine biodiversity loss is taking place and is having an increasingly profound impact on marine ecosystems.

Human activities including overfishing and habitat destruction, cause disruptions to the climate, marine ecosystems and food webs. Overfishing has resulted in decreased abundance of some targeted fish species, and also impacts unintended or ‘bycatch’ species.

Increased atmospheric carbon concentrations have led to rising ocean temperatures and acidification, threatening the life cycles of marine animals in all oceans. Destruction of sensitive coastal and seabed habitats further threatens marine life and may also play a role in reduced carbon sequestration.

Climate change and raised ocean temperatures are impacting seasonal life events of marine animals and plants, notably migratory patterns of fish, the location of spawning grounds and the timing of breeding seasons.

As oceans warm, marine animals migrate to cooler waters. This can mean fish move into different jurisdictions, away from traditional fishing grounds, which has a direct effect on the fishers who depend on them for their families and income.

Seasonal change in water temperature is normally a signal for many marine animals to begin their migrations or relocation to spawning grounds. Now with waters warming or cooling at different rates and at different times, some marine animals are either delaying departure or not leaving at all. This may increase competition for resources or put them in the path of incoming predators they would have previously avoided.

For many marine species including fish and reptiles such as turtles, the water temperature even affects the sex of their offspring, resulting in an imbalance that may affect population abundance and the genetic resilience of subsequent generations.

What other threats are there to marine biodiversity?

Overfishing or ‘overexploitation’ has been found to be among the three biggest threats to biodiversity loss by unsustainable reduction of stock abundance. Since the 1970s, the percentage of overfished stocks has increased from around 10% to more than 35%. When a stock is fished beyond biologically sustainable levels, i.e., past the point of it being able to replenish itself, it is not as productive as it could be. Under even stronger fishing pressure, it may even collapse, with detrimental consequences to local and global economies, and to the wider ecosystem.

A biologically diverse marine ecosystem is vital for ocean health, our planet and humanity’s survival. Highlighting the need to curb overfishing as a driver of biodiversity loss, the MSC Fisheries Standard for sustainable fisheries management was cited in the previous set of global biodiversity goals, the 2010 Aichi Targets, as a credible, measurable, science-based indicator for efforts to maintain marine biodiversity.

What has COP-15 done about marine biodiversity loss and sustainable fishing?

The Kunming-Montreal Global Biodiversity Framework aims to halt biodiversity loss for 30% of the planet by 2030 and achieve recovery by 2050.

Goal B in the framework addresses the imperative for the sustainable use and management of nature and its contributions to humans as an ecosystem service provider. The goal is to achieve a value for the contribution of nature as well as to maintain, enhance and restore those provisions.

For governments, the UN and other organizations that commit to delivering the targets in the framework, the CBD encourages them to use various official “indicators” or tools by which they can measure their progress.

The Kunming-Montreal Global Biodiversity Framework has cited the MSC’s Fisheries and Chain of Custody Standards as official indicators for two of the targets that pertain to Goal B.

Target 5 cites both the MSC Fisheries and the Chain of Custody Standards as indicators that can demonstrate that the use, harvesting and trade of wild species is sustainable. The Chain of Custody Standard is cited for a second time in Target 9 that aims to give value to ecosystem services and integrate the benefits from biodiversity into policies, accounts and assessments of impacts in all sectors of the economy.

It is widely acknowledged the framework’s goals cannot be achieved unless the world also meets the goals set out to limit climate change. However, the Global Biodiversity Framework is seen as a landmark deal for biodiversity which is as ambitious and as comprehensive as the Paris agreement was for climate change. 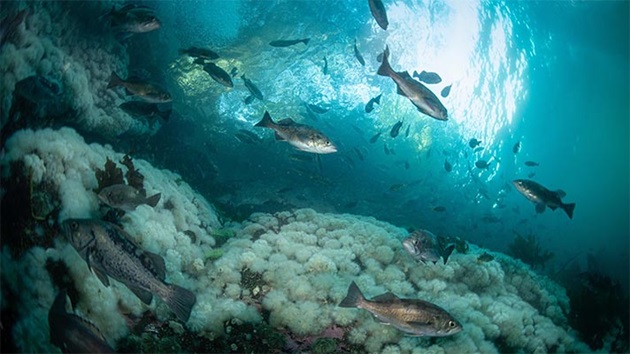 Sustainably managing our natural resources will mean that our oceans remain productive, resilient and adaptable to environmental changes.